Samson Technologies began in 1980 designing wireless microphone systems. Today, we are an industry leader in both consumer and professional audio with three notable brands: Samson Audio, Samson Wireless and Hartke. Over 250 of our products are sold and distributed in over 140 countries around the world.

In 1980, Samson introduced our first wireless microphone system. Over the years, Samson has become a leader in the wireless field. In the early '90s, we began to expand the reach of our audio products through the development of power amplifiers, mixers, wired microphones and signal processors. In 2005, we introduced the first professional USB microphones to be used by musicians, broadcasters and podcast enthusiasts. Our USB microphones are now the industry standard.

Hartke revolutionized the world of bass amplification in 1985 with the creation of a unique aluminium cone driver that produced a bass tone with far broader dynamics than had ever been heard before. We have gone on to create a full line of bass amplifiers, cabinets and combos that are used by some of the world's greatest musicians.

Over three decades, Samson has grown from a small two-person operation to a worldwide enterprise, dedicated to innovating new products that will enhance the lives of music and broadcast professionals everywhere. more...

Samson can be found in our following Categories and Sub-Categories: Microphone

7DaysDeals.com is proud to be an official reseller, authorized retailer and distributor for Samson in Singapore. 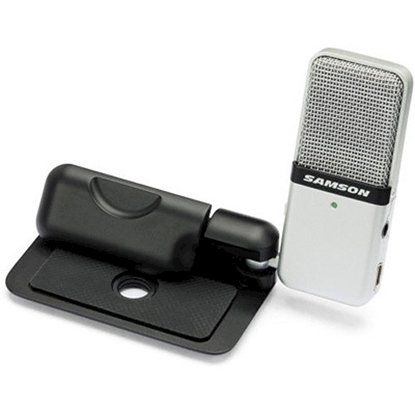 $75.00
The Go Mic USB Microphone from Samson is a compact, plug-and-play solution that requires no drivers and is completely Mac and Windows compatible. The Go Mic features a USB audio output and a 1/8" (3.5mm) headphone output. A folding clip allows for laptop screen mounting.